Technology and depression - get your greens

There have been a few stories in the press in the last couple of days that "excessive" internet use is associated with depression (e.g the Guardian or Science Daily).

"While many of us use the internet to pay bills, shop and send emails, there is a small subset of the population who find it hard to control how much time they spend online, to the point where it interferes with their daily activities."

"Our research indicates that excessive internet use is associated with depression, but what we don't know is which comes first -- are depressed people drawn to the internet or does the internet cause depression?

(Ah, there is that old causation vs correlation thing again!)

The abstract is here if you are interested. Anyway, it got me thinking. About television and more broadly internet use and how it fits into a healthy life.

At one level there is a basic problem that these activities rob you of sleep. Sleep is ludicrously good for you and adequate sleep in the dark is essential to health. So often, time spent watching TV or browsing the net is time when often you would be better off asleep.

But there is more. Much of the argument of this blog is that health means doing that for which you were built....moving and eating as you were meant to. The sedentary, civilized life is not how were were designed to live. Evolutionary Fitness, Paleo diet, the Primal Blueprint (Mark Sisson's Primal Blueprint includes "Get Lots of Sleep") or whatever, the argument is the same. We live in ways which are incompatible with what we were designed for......and there are consequences. 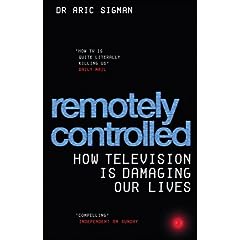 Aside from the consequences for sleep, the sort of entertainment and stimulation provided by TV and the internet is not what we were desigend for either.

Reading soemthing by Keith Thomas of evfit made me think about this recently. He refuses to watch TV for reasons he explains here, where he reviews a book by Aric Sigman called Remotely Controlled.

Intrigued, I bought the book

Aric goes through a series of studies that demonstrate that watching a lot of TV is associated with:
There are a whole series of scientific studies quoted to support that position. It is not just the inactivity of sitting down and watching however, the argument is that the type of stimulus provided has precisely these effects. One reviewer on Amazon explains:

Essentially his argument is that
a) Television works very much like hypnosis and essentially produces a reduction of our frontal lobs responsible for critical thinking,
b) that it is particularly dangerous for children under three. Their brain is still forming and requires an environment that makes the children move, speak and think. Television is not doing any of this.
c) furthermore it produces a "pseudo social group" and false social reference patterns. This not only destroys a lot of local culture but causes bolemy with girls, men and women who have a false sense of their bodies. Females going splashing out on clothes, men just thinking of model type bodies.

It is really interesting stuff.

While TV viewing has a whole raft of nevetive effects, the science indicates that exposure to nature, green spaces, the outdoors, has a similar raft of benefits. And so it should - it is what were were meant to do. We were meant to live in nature. That is why I love being in the mountains.

Here are a couple of the studies he refers to:

The restorative benefits of nature: Toward an integrative framework - television tires out our attention, while nature gives us rest - it holds our attention but also allows us to reflect on other things.

Urban residential environments and senior citizens’ longevity in megacity areas: the importance of walkable green spaces - people that live in cities are healthier and live longer when they are exposed to greenery.

Conclusions: Living in areas with walkable green spaces positively influenced the longevity of urban senior citizens independent of their age, sex, marital status, baseline functional status, and socioeconomic status. Greenery filled public areas that are nearby and easy to walk in should be further emphasised in urban planning for the development and re-development of densely populated areas in a megacity. Close collaboration should be undertaken among the health, construction, civil engineering, planning, and other concerned sectors in the context of the healthy urban policy, so as to promote the health of senior citizens.

Is that right? Or are the "minimum" and "maximum" switched?

I got the book out from the library the first time you mentioned it, and I've just now finished it. I have to say I was disappointed, although I agree with his premise.

I found the writing dull and sloppy. It desperately needed some editing. For instance, just from the last few pages I noted the following:

Men find it easier to languish in the classic 'fight or flight response' to stress ... [p321]
How can you "languish" while fighting or fleeing?

The burden of proof should now be on proponents of television to demonstrate that the way we use it [...] is harmless. [p326]
Well, no. This is a logical rather than grammatical error. You can't prove a negative. Prove to me that we're not all stuck in a software program as in the movie the Matrix.

As I say, I agree with him. But I think it's a very poor effort.

Also, you've conflated "greenery" with "outdoors". Your photo shows a scene devoid of greenery, but the book never actually states that someone getting their recreation in the desert or mountains would be as well off as someone going to a park.
(I think probably they would, but the book doesn't adduce any evidence)

Correction: Blowing up your picture I see there is some moss or grass or whatever, but you know what I mean.

One of your best posts yet, Chris.

I gave up TV years ago, except for an infatuation with the LOST series for one year. We still watch movies from time to time, but even that is becoming rare. I could do better with my time management for internet surfing, and replace that with more time spent outdoors. Or I could get a weather resistant laptop with Wi-Fi...

Great post Chris, thanks for pulling this stuff together. As I sit here on the internet!

No, I am right I think. Maximum as in this is the most TV you should get; minimum as in you should not get less time with greenery than this.

Chainey I admit that I do conflate greenery with outdoors. I suppose i was thinking of the "great outdoors". I think it is also consistent with the argument I am making.

As to the quality of writing, I agree in parts. There are some clunky parts to the writing and at times it is too journalistic. I think the arguments are sound though and that is what I am pointing towards

John - thanks. I don't watch much TV, but spend far too much time on the internet!