Barefoot is best for kids 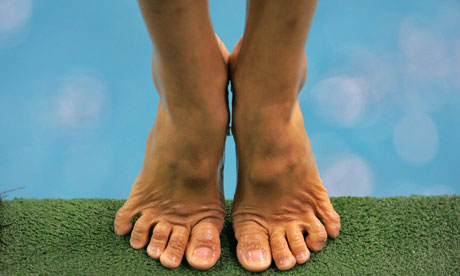 Interesting article here in the Guardian: Some experts now believe that all shoes are best avoided in childhood

From a functional perspective, shoes shouldn't be necessary," says O'Neill. "In fact, there are more likely to be disadvantages and problems from wearing shoes than not wearing them - among them, deformation caused by a poor fit, ingrown toenails, and athlete's foot. But you have to consider the environment the child is in. Let's be honest. Do you want your child walking on the streets or in the park barefoot, where there might be dog poo, dirt and possible hazards like glass?"

The article makes complete sense but like mentioned, it's just not realistic in most countries to walk around bare foot outside no matter what benefits exist.

But inside the home is a different story. Kids (especially toddlers) should expose their feet as much as possible instead of being locked into wearing their shoes at all times.

This is a habit that would be easy to introduce to children. So shoes off in the home will help their feet healthy and lessen damage. And shoes on when outside to keep them safe from the urban jungle.

What about wearing sandals? Really simple ones, for example, that are flat, made of a foam or rubber. Granted, we are still losing proprioception, but at least we aren't constricting the foot.

Additionally, it's easy to kick off when a barefoot opportunity arrives.

I see the problem with not being locked into your footwear, however. This would be a place for more strapped down sandal alternatives.

I've heard that people had much healthier feet before shoes were invented. It makes sense since your feet will adapt to their environment and get stronger, rather than being trapped all day and unable to breathe. Good find here.

As I watch my now 2 yr old learn how to walk, it was more than interesting to see him walk barefoot first, and walked fairly well. Then with shoes, hard soles, he fell constantly. We then got him these sfot, pliable "foot coverings" that were kind of a shoe. He walked great in those.

I had already been convinced that minimal footwear is the way to go, but this was more fuel for my argument!

Chad - that is a really interesting observation

I think people overestimate the dangers of going Barefoot. I grew up in the hippie community and was barefoot basically all summer every year and as small child was known for kicking of my shoes in winter and walking around in the snow leaving melted foot prints. I never had any problems for it. There are times when we need shoes but there far less often then people think.

There are all types of soft baby/toddler shoes available. Target even sells them. Just search "soft soled toddler shoe" Brands like Pediped, Robeez, Ministar, Soft Star shoes....will all show up.

I had the same observation as the upthread poster in regards to watching toddlers walk at parks. It looks very difficult when they are wearing 'sneakers'.