The Epigenetics Revolution: DNA is a script not a template 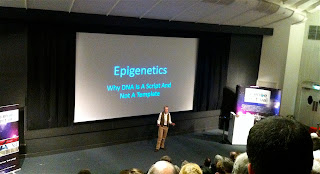 Friday night we went along to another lecture at the Edinburgh Science Festival.  This one was on one of my trinity of sexy subject (mitochondria, the microbiome and epigenetics).

Nessa Carey was the lecturer and she was talking about epigenetics.  It was a really good talk.  What made it very helpful was the way in which she used good illustrations to explain the complexities of epigenetics.

She talked about how DNA is not a template to make lots of identical clones, but a script:  her example was Romeo and Juliet....the words can be the same but what comes out at the end on stage or screen can be totally different.

Another one she had relating to disease as much as anything was the idea of a bicycle.  The bike can be fine, everything functioning and ready to go.  However, if it is locked to a fence it will not be going anywhere.  Nothing wrong with the bike, but until it is released then it will not function.  Similarly your DNA can be fine with the code for all sorts of health, but if some environmental factors ar limiting it then the potential will never be expressed.

Some of her historical stories were fascinating too, like the Dutch Hunger Winter and its impact on the health of children and grandchildren of those who suffered at that time.

Her other useful example was a set of diagrams using sweets / candy to explain the structure of DNA....there is a pdf on her site which presents her model
and of course the video!

I might buy her book when I get a bit more time to read.

My question for her was how to unlock my bike to reach my full potential.....
Posted by Chris at 1:41 AM

Email ThisBlogThis!Share to TwitterShare to FacebookShare to Pinterest
Labels: epigenetics