When I was at my mum's house at Christmas I found some of my old bodybuilding magazines from the mid 1980s.  Looking through them it is fascinating to see what has changed and what is still the same over that period.  The top pro physiques are much more massive now (), but the average natural amateur is not much different.  Nutrition knowledge has been al over the place, but the consensus is still in general terms pretty much what it was then: get enough protein and then watch your calories...

Anyway Andreas Cahling was on the cover of one magazine: 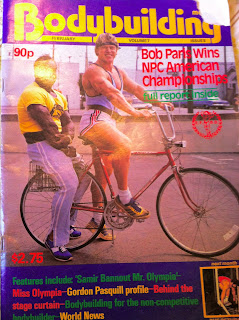 Apologies for the quality of the photo - the paper was too shiny.   That is Cahling on the saddle, with Johnny Fuller riding pillion.

Cahling was never the top level but he was a good competitor in the 1980s.  Well he is still at it!  At the age of 60 he just competed in the Master's Olympia.  He didn't do that well in the placings - younger more massive physiques dominated - but for a 60 year old guy he looked pretty good.  Drugs may well still be involved however...... 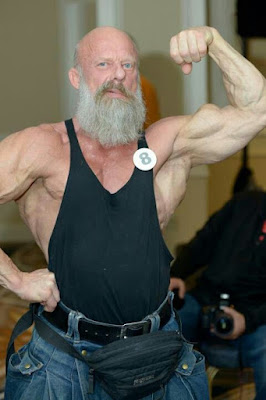 He has been posting videos of his condition on his blog

"Drugs may well still be involved however, I would warn."

I would obviously agree!

Clarence Bass is an inspiration and a hero of mine. However I think people who have not read all of his books might not be aware than in Ripped he gave an account of taking steroids himself for a while. I think it is something that he did only once but he can't be seen as "lifetime" natural

I didn't know that. Still his physique seems to be that of natural bodybuilders from pre-steroid era who looked more like Michelangelo's David than like Arnie.

by the way, I do not want to exaggerate Bass use of gear. In Ripped he explains that he used a very low dose of Anavar for only a couple of months in 1979. He got ripped without it and never used it again as far as I know

Great thoughts on fitness here. I wanted to also share this.
Wow great deals on the Tread Climber by bow flex!
https://www.blogger.com/blogger.g?blogID=3676922967970506781#allposts

Andreas looks pretty good and muscular at 61...
Probably using low dose roids...
If he went nuts on the roids he'd easily get the massive size he developed later in his competitive career in the early 80's...
For him to compete after his facial problem shows the champ this guy always was...
He was ubiquitous in Muscle and Fitness mag in the late 70's and early 80's..I remember he wrote the "Beginner's Column"...
I'm glad to see him because so many bodybuilders from that era (when as a teen I loved reading those magazines every month)are now gone...The top pro physiques of today are completely gruesome...