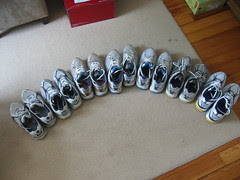 Just a short one. I spotted this research the other day. (also here)

Expensive trainers are not worth the money, finds a small study published ahead of print in the British Journal of Sports Medicine.

Cheap and moderately priced running shoes are just as good, if not better, in terms of cushioning impact and overall comfort, it concludes.

The research findings are based on a comparison of nine pairs of trainers, bought from three different manufacturers, in three different price ranges. The cheapest pairs were priced at £40 to £45, with the moderate range costing £60 to £65. The three most expensive pairs cost £70 to £75.

The 43 participants were not told how much any of the shoes cost.

Plantar pressure - the force produced by the impact of the sole hitting the ground - was recorded in eight different areas of the sole, using a special device (Pedar) attached to the shoes.

Different models performed differently for different areas of the foot. But, overall, there were no major differences among the shoes, irrespective of brand or price.

In fact, plantar pressure was lower in the cheap to moderately priced shoes, although this difference was not statistically significant.

Runners were also asked to rate the comfort of the shoes from “least” to “most comfortable imaginable,” using a validated graded scale.

Comfort ratings varied considerably, but there were no obvious differences among the shoes. And price was no indicator of comfort score.

Running produces sizeable shock waves to the bones of the foot, which radiate to other bones in the body. The force of the impact increases with speed and distance, say the authors.

The type of cushioning in the soles of running shoes aims to prevent this damage, with expensive trainers deemed to be the most effective.

It makes sense. Remember the "template" I mentioned the other day in the post about creatine?


The idea is that in all this fitness and diet information, you can cut through much of the complexity by simply asking "is this what I was designed for?"

I don't believe that we were designed to wear sophisticated shoes that prevent pronation and lock your complex feet into "casts" so that the various bones are stuck into position.

Going barefoot is possible indoors but is not practical outside. That is where more flexible footwear - like inov8's are perfect choice. I think we need to intervene as little are possible in our natural gait mechanics. That will sound like heresy to those who have spent a fortune on orthotics. One day I'll find a stockist for Vibram 5 fingers here in Scotland....

I really agree with the inov8 philosohpy on this one:

Running bare foot is associated with a substantially lower prevalence of acute and chronic injuries to the ankle and lower limbs, so, the inov-8 team designs all our footwear range to allow the foot the freedom to move and function as nature intended, without interference from the structure of the shoe. inov-8 shoes protect the foot from the harsh external environment experienced by the off road runner but maintain the feeling and function of bare foot running. inov-8 believes that foot function has evolved over millennia to provide a stable platform on which the runner can perform. It is, and always will be our philosophy to look to the natural function of the foot for inspiration and guidance whenever we design footwear for the high performance athlete or the recreational runner.

The whole complex running shoe thing is a huge marketing exercise in my view.

If you’re forking over extra cash for the high-end exercise kicks, save your money

If someone comes in in these things, particularly the "air" or "gel" ones, they get flicked off. Its like squatting on sort round heels.

It seems also that if you are a runner and smacking your feet down on the pavement like Ali used to land Ko's then perhaps it is your running style that needs help and running on rubber pillows is not the solution it is smacked up to be.

If you look at Michael Johnson run, you could put a wine glass on his head once he's out of the blocks (figuratively...) and drink once he passes the line.

Agreed - I think most running shoes stop you from running properly because they are cushioned in the heel encouraging you to land on it, when the smoother way IMHO is to land on the ball of your foot.

Michael Johnson had a fantastic style.

It does look like the best guys have wheels rather than legs. No wasted motion, straight ahead, not up and down. Lots of pull less push and no need for overinflated tires on the rims.

I'm not an expert on podiatry but it doesn't seem that the people with the worst shinsplints and other problems tend to live (running's only part of it if at all) in the "best" shoes.

The Science of Sport blog had an interesting series on running techniques recently that is worth looking through:
http://scienceofsport.blogspot.com/2007/09/running-technique-part-ii-biomechanics.html

Where this report falls flat is on longevity. Sure, any shoe is decent for the first 50 miles. But how do they feel for the next 350 miles? That's where the more expensive gels and air bags have a real advantage over cheap EVA foam shoes that break down quickly.

I can't get that whole link Chris, the far end got cut off in the box.

I don't know about the longevity difference for running either. However, I've seen people who can afford it change expensive ones after every race, and these are just people who run for fun and I guess don't do flats.

With weights the really expensive one's have really low longevity (or at least equal to the "junk"). This thing happens where people's feet start rolling off to the side off the cushioning, distorting the shoe and making something troublesome even worse.

I don't know about what people wear for tennis now, but I've seen them change on TV between sets but I think they get everything for free anyway.

Even with shoes I like, I just couldn't live that way ;-)

agree re expensive shoes for weights - the cushoning is a hindrance.

I am a trainer and I have also got some nice pairs too. But your collection is awesome. The main thing that I look while buying is comfort.