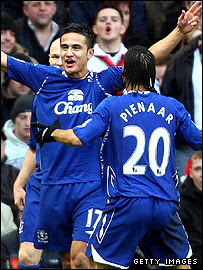 A little while I had a post up reporting a study that found that soccer was more effective for promoting fat loss than was jogging. I talked about soccer being a series of sprints / jogs / walks and speculated that it was this mix of intensities that was important - similar to Art DeVany's thoughts on the power law distribution - lots of easy stuff and a few hard bits randomly scattered in.

Here is another study looking at building training for soccer around sprints rather than long runs. In fact this study seems to indicate that repeated 40 metre sprints were more effective than longer intervals (4mins). It makes sense - football is about sprints, that do not usually go on longer than 40 metres. You don't run continually for 4 minutes in a game, so why train like that?

Sprint vs. Interval Training in Football.


The aim of this study was to compare the effects of high-intensity aerobic interval and repeated-sprint ability (RSA) training on aerobic and anaerobic physiological variables in male football players.

Similarly, a significant interaction was found in RSA mean time (p = 0.006) with only the RSG group showing an improvement after training (from 7.53 +/- 0.21 to 7.37 +/- 0.17 s). No other group x time interactions were found. Significant pre-post changes were found for absolute and relative maximum oxygen uptake and respiratory compensation point (p < 0.05). These findings suggest that the RSA training protocol used in this study can be an effective training strategy for inducing aerobic and football-specific training adaptations.
Posted by Chris at 7:17 AM

In American style football, there is occasionally, though it is much rarer now that if some is good, more is better and they run all the time, laps before practice, laps after and laps as punishment.

An average lap is a quarter mile. When's the last time you saw a run from one end to the other and back in any game? I havn't and I've seen the same occasionally crazy stuff as anyone who watches football.

I think the biggest change in strength/conditioning coaching of the last twenty years is first that there are some good coaches, and second that there is so much more emphasis on qualities of performance rather than simple quantity. They try to hit the nail on the head, rather than just pounding it in.

In the kind of football you are talking about, in the article I think the most incredible (in the good sense) thing is how they came up with a standard set to measure by that models a performance.

What might be interesting to do is to take several games, Draw and measure the movements of the positions then come up with specific 2d speed and direction (forward, lateral, back motion) vector sets for each with a weighted (toward top performances) average over several games.

I'm sure it's been done, but it would be enlightening to see this for several sports since I suspect what we think is happening isn't quite it and the actual numbers might suggest training possibilities we haven't thought out before.

Especially in the way we set out phases up to and including the season itself.

Less is not more, more for it own sake is usually too much, and enough is enough. The less confusion about that, the better.

I have used the 4 minute protocol and have recently developed my own which is
5 x 20m (20m grid 5 lengths) x 5
5 x 15m x 6
5 x 10m x 7
all are to be completd at max with 2 min recovery between sets. This was used for the Australian U20 female team prior to world cup qualifiers and there was an improvement of approx 10-15% in max Aerobic Power after 2 x/week (4 weeks) and 3 x/week (4 weeks) I have not publihed this work yet but the benefits are that it is over in 15mins doesnt negatively effect sprint and power and is more specific to the game.

That is really useful Craig - and more specific to the game as Bryce was proposing.

Craig - by the way that is an Australian (Tim Cahill) in the photo. He's been playing really well for Everton this season.