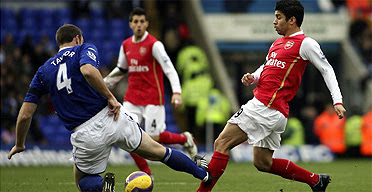 If you live in the UK - and are a sports fan - you can hardly fail to be aware of the horrendous injury suffered by Eduardo de Silva this weekend.

All I remember is when I looked down at my foot it had turned the other way....

The Arsenal player was tackled in the 3rd minute of a match against Birmingham on Saturday in what initially appeared to be a late but not a serious challenge. However, the reaction of all players on the pitch spoke volumes about the seriousness of the injury. They were all sickened by the severity of the broken leg which Eduardo suffered.

If you have the stomach for it - and watching it on TV made me feel queasy - you can see a photo here which illustrates the severity of the injury.

Thankfully, it looks like the player will recover and play again, but such injuries do not always heal: David Busst had to retire from the game after a compound fracture go infected with MRSA and he ended up with much tissue damage, as he explained in the Guardian today.

I was thinking about this incident a fair bit - maybe because it was so horrific. I also had a look on pubmed for relevant studies.

I read a couple of abstracts which were actually a bit depressing:

Tibia and fibula fractures in soccer players - this study looked at the incidence of the injury suffered by Eduardo and worryingly noted that shin guards were not that good at guarding the shin! (A more recent study however does seem to indicate that there is value in using shin guards and that they have reduced the incidence of serious injury)

We've mentioned before that playing soccer is an excellent way to get fit - it is a sprint type activity with lots of balance work - and more effective than a jogging programme. However, all sports carry risks. Soccer is often characterised as a non contact sport when compared to rugby or american football, but it is not as you can see from the pictures of Eduardo.

It is great to watch, but I think we need to be aware of the dangers. If you are after fitness, there may be other, safer ways to achieve your goals.

Then again, life is full of risk and maybe the lesson is that we need to accept that too. Our current lifestyle is too safe, too protected as it is. Maybe we need to get out and move and play our sports, accepting the risks that go with the benefits?
Posted by Chris at 12:32 PM