The Limits to Performance 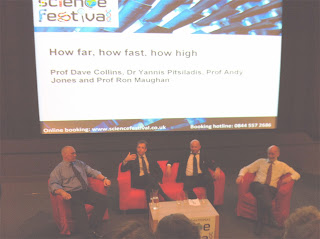 I went to an event last night at the Edinburgh Science Festival.  It was a fascinating lecture by 4 of the UK's (world's?) top exercise scientists.

The lecture was called How far, how fast how high?


What are the genetic, physiological, biochemical and psychological limits to the human body? Former UK Athletics Performance Director, Professor Dave Collins, joins sports scientists Dr Yannis Pitsiladis and Professor Andy Jones, and nutritionist Professor Ron Maughan to discuss the physiologic, genetic, psychosocial and economic determinants of success, and the limits to performance. Citius, Altius, Fortius is the Olympic motto, but how far, how fast and how high can we actually go?


All of the talks were excellent:

Anyway, a really interesting evening.
Posted by Chris at 3:02 PM

The question for Dave Collins is NOT "did powerlifters who thought they were on steroid but who were actually getting a placebo get stronger?"

The question is: "Did A CONTROL group of powerlifters on a similar training regimen get stronger as well?"

And, really, the other questions are: If so, is there a statistical difference between the two groups? And can we reproduce this study in another lab? And were the administrators of the placebo aware of what they were doing? And the trainers (did the trainers act differently, thinking the athletes were juicing)? And did all the trainees get equally stronger? If not, then are you prepared to say that the ones who got the most benefit were the ones that "believed" the most?

Since we can't measure "belief" before the fact, people use belief to explain away phenomenon that they have no other explanation for.

It's really hard to design a good study.

It was a pretty good study from what I recall. I don't have the full paper, but the abstract is here

Yeah, I'd love to see the full paper. The abstract, not surprisingly, makes the results seem unequivocal ;-)

What strikes me is the idea that "elite athletes are those who believe that they are the best" juxtaposed with the information that Paula Radcliffe's V02max and vV02max are "off the charts".

Ok, you/Dave Collins did add "all things being equal"...whatever THAT means.

To complicate things further, I'd also love to see control group details, but here's the thing - I can guarantee that the control group, if there was one, was NOT controlled for their diet/nutrition/supplement intake to make sure it was a level playing field. Why is that important?

Yannis Pisiladis cotrectly (in my view) points at epigenetics as a key factor. The epigenetics factor gives FAST adaptations to the environment and - despite Ron Maughan's assertion that nutrition is bottom of the pile - we know that nutrition is one of the KEY promoters of epigenetic change. We also know that, through that mechanism, the mind exerts physiological effects.

Great report. What these type of symposiums need is an unashamed generalist to tell the specialists what it is they are actually finding :)