News: Vegetarian diet is bad for the thyroid

I spotted this poster outside a newsagent today and it prompted me to buy the paper: 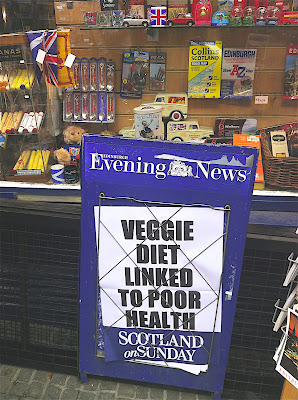 The story is here and basically is telling us that thyroid problems are increasing because:

The latest official figures show that NHS Scotland spent £8 million treating thyroid conditions in 2011 compared with just £2.2 million in 2001. Over the same decade, the number of prescriptions for thyroid problems soared from 1.2 million to 2.2 million.

Experts believe a lack of iron from reduced red meat consumption and large amounts of soya in some vegetarian meals has contributed to the increase of more than 300 per cent in Scotland’s thyroid drug bill.

The poster really made me stop - it is so rare to see vegetarian diets identified as UNhealthy.
Posted by Chris at 9:41 AM

isn't this kinda bad science? I mean if they're correlating two independent facts ('cutting red meat from diet' and 'increase in thyroid problems') is it really that conclusive?

Furthermore, assuming the cause and effect are valid, is this really a big deal? It doesn't mean vegetarianism is inherently unhealthy, it just means that more care needs to be taken to get balanced nutrients - which is true for any diet: if you were to eat nothing but lean meat (e.g. rabbit) you'd get very sick, possibly die. This doesn't mean eating rabbit is unhealthy.

Of course. It is like that red meat study that we all ripped into. Just more epidemiology.......

...Except there are also controlled studies and physiological facts that impicate veg*n diets in thyroid problems (too much soy, low vitamin A, etc). It could be that iron problems are actually a result of the poor thyroid function/metabolism, not a low intake itself.

Spring rabbit disease is mostly myth. It required that you basically be starving first, then only eat starving rabbits. Not a common situation today, and this is April 1 of course.

If you eat only protein, first you loss energy, become lethargic, in just a few days, and your body starts to let go of fat to balance the energy demand at the reduced level produce by the lethargy. Self preservation likely, conserving energy in famine, just like any weight loss program.

It wasn't the April Fool story - that one was about pandas and bagpipes....

It's getting harder and harder to tell fact from fiction!

@CPT_STORK It's not just correlation, they identify reduction in red meat as a possible cause because of the proposed mechanism (reduced iron) not just because it happened at the same time. One of the major problems in the 'red meat increases all cause mortality' theory is that protein, animal protein, fat and animal fat *aren't* associated with mortality, so you really have to wonder how it could be that red meat specifically, magically causes death, but not foods which have much the same properties as red meat.