Do not hurt yourself....

I don't think I've shared this on this blog, but mentioned it on Facebook.

Impressed by an athlete

A few weeks ago while at work I bumped into a mate who is a veteran sprinter - Scottish 100m and 200m champion for the over 50s.  He is a proper athlete  -  runs internationally, trains with some Olympic and Commonwealth Games athletes.  That sort of thing.

We often bump into each other at the gym at work and chat.  He is always interested in what I am doing and I ask a lot about his training.

Anyway, this day he was going to be doing some sprints at lunchtime, in the car park.  Dragging a car tyre.  He invited me to join him for the session.  It sounded fun and I was a bit flattered to be able to train with him.

Lunchtime saw me changed and in the car park.  A brief warm up and then we started.  He gave me some tips on form and then it was a 50 m sprint, while dragging this tyre, pulling it attached by a rope to a weight-lifting belt, then a sprint back to the start where we swapped the belt over.

The first two went Ok.   It was hard work but it felt good.

The third one was about 10 m old when, just as I was standing tall to sprint to the end, my right hamstring tore.  It was a real obvious pop and I limped to a standstill.....limped back to the start and gave up for the day.

It felt pretty rough -  the hamstring was shutting down....I showered went in to the gym and stretched.  Had some treatment that night from Colin Gordon, which helped.

It ruined me for a few weeks though - all bending over, hip hinge type moves were impossible.  Walking was OK, but running was out. 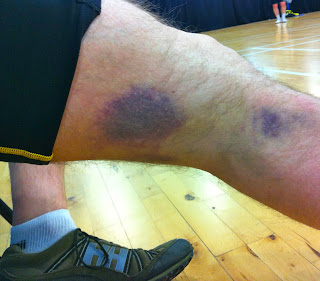 Initially I thought it was just a spasm, a pulled muscle, put then I saw the bruise.....Something had torn and bled.

I did not need to do all out sprints, trying to impress someone, with poor form and insufficient warm up.  My goals do not need things like that.  I put myself at risk of injury....and I got injured.  It curtailed other activities for a while.

Remember above all else....do not hurt yourself.  Train to get better, to be more able.  Don't let it damage you.

above all, train to reach your goal.

I badly sprained my ankle when warming up for a sprint session (not paying attention and stepped into a hole). Stupidly, I completed said sprint workout. This was in late October and I still have tweaky moments to remind me what a dolt I was for finishing a session that should have ended on the grassy knoll where I turned my ankle.

One positive effect is that it re-focused my training regime to one hillfit or similar resistance workout, one yoga practice, one swim session, and lots of walking each week. I have yet to add a HIIT session but may over the holiday. The point is that while I "got my sprints in" that day, I was laid up for 2+ weeks, so in the end I was further behind. Had I called it off immediately, my ankle would likely have mended faster.

Perhaps the lesson from your injury is to purchase 'Becoming Bulletproof' which is advertised on your site...

sorry man, that sucks. SO many people I've known have torn hamstrings sprinting;especially starting back.
sprinting pulling a tyre is really tough too.
Heal fast and when you get back to running remember not all sprints have to be "sprints" :)

Ouch! Been there, bud. Lesson learned, I hope :)

Cheers guys. It took about 6 weeks but I'm all healed now. I have learned a lesson though.

Oh this is so true! We do things to keep up that we really should not do!
Commiserations.