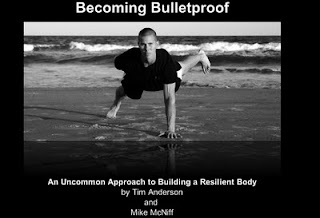 I saw this ebook by Tim Anderson
and Mike McNiff mentioned in a post by Dan John  I have great respect for Dan so I stumped up the $7 via Paypal and got myself a copy of Becoming Bulletproof.

Somes I get a bit fed up by the macho rhetoric that can be applied to training books - they want us all to be renegade....tactical.....warriors.....men among men......but in this case bulletproof just means resilient, maintaining function.

I am very impressed.  It is a relatively quick read but there is a lot of material in here.  It ties in some ideas from several sources that I have pointed to over the years and binds them together around some simple concepts and movements.

If you have followed some of the people and concepts that I have pointed to over the years you will recognise much of the ideas, but there were new things to me and the basic simple set of moves that they recommend are almost obvious given the conceptual framework that they build.

There are elements here that are similar to things I've read from Z health, Gray Cook, Pavel and others as well as the fascinating ideas of neuroplasticity that I have read about in Spark which I head about from Frank Forencich (who I interviewed here)

I would also say that the neuroplasticity ideas that they explain makes sense of some of the whole MovNat approach of Erwan Le Corre.

Anyway I do not want to give too much away, but I totally recommend this book.  Check it out.
Posted by Chris at 11:59 AM

chris:
i am interested in this ebook. how many pages is it?
what percentage is diet related?

48 pages. Only a little bit is diet but that is not the focus. Maybe 5%