This raised a smile 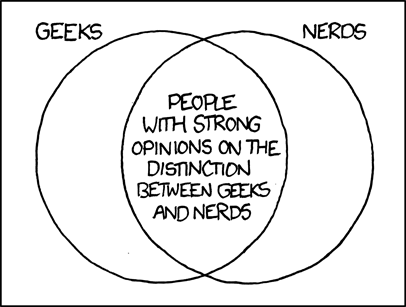 (more here) This is certainly true in the fitness / health world. Especially among the blogs. It made me think of something I read on the Moynihan Institute recently which was riffing on how divorced this subculture is from the rest of the world. The things we obsess about are just off the radar to most people:

Are you a member of the fitness glitterati?

05/11/10
Chances are that if you reading this that you are a member of the fitness glitterati. It’s kind of like being a new ager. New agers never admit to being new age or even liking things of a new age nature. Their lives are simply so intertwined with new age mumbo jumbo that they can’t distinguish otherwise. It’s called denial.

You most likely fancy yourself as a regular guy that just likes to train and doesn’t want to deal with all the bullshit that goes on in modern day gyms. This may be true but this is the standard prerequisite to becoming a member of the fitness glitterati. I realized that I was indeed a member of the glitterati when talking with a family member the other day. I would say she is knowledgeable about fitness. She was a competitive athlete in college at an elite level and stays fit currently.

I knew something was wrong when I was talking about certain health and fitness issues in a very matter of fact way and she was looking at me like I was mad. I took for granted that she knew what I was talking about. We develop our world view based on those we surround ourselves with. In one study when college grads were asked to estimate the percentage of Americans with college degrees they routinely responded that 60%-70% had degrees. They were astonished that the actual percentage was well under 30%. In their world most people had college degree. We gravitate towards people like ourselves.

Well I and presumably you have done the same thing. We spend out days discussing the next big thing or some new study on the various fitness forums. We forget that most people are unaware of most of this crap - and yes most of it is crap. Most people don’t workout and are generally unaware of what they are doing to their bodies. They simply don’t care. Those that do train generally still train like quasi body builders with their body part splits and cardio days. They might do some yoga, Pilates, spinning class or some boot camp bullshit.

The vast majority of people that train are deeply entrenched in the bourgeois camp. They eat low fat and think breakfast cereal is healthy. When they train they actually wear shoes with a lot of support and they almost never train outdoors unless its cardio day and they are out jogging or cycling. Every thing about their training is so 2007. They are quite simply squares.

We on the other hand glitter. We transcend bourgeois values. To us these people are the Hoi Polloi, rabble, Philistines. Here are some things that are a must among our crowd this year. Simply everyone that matters is either doing them or in some case no doing them.

No one sits anymore. As I am writing this I am standing in front of my makeshift workstation. We all know that sitting is bad for you even worse than smoking cigarettes. Sitting is so 2008.

The other day I walked by a 24 fitness and guess what I saw? Throngs of people were jogging on treadmills. But wait it gets better. They were wearing shoes! Actual running shoes! I mean really, who wears shoes anymore? How tacky. Everyone knows that these days it’s barefoot or at the very least a pair of Vibrams.

Can you believe that there are people that still eat grains? I mean the other day I saw a guy eating a bagel. What is this the 80s? And how embarrassing is it when some rube asks you if you are eating low carb? No one says ‘low carb’ anymore. It’s Paleo. We eat Paleo not low carb. Low carb is for fat guys in t-shirts and Bermuda shorts named Jimmy.

You really know your in Palookaville when you walk into a gym and 2/3 of the guys are bench pressing? Don’t they know benching in non functional and that a guy that snatches 45 pounds is really stronger than a cat a that benches 500. Geez. No one benches anymore simply no one.

We may not bench or do barbell curls anymore but we do Olympic lift. Sure our numbers are paltry and our form is suspect. We may even be doing more damage than good but that’s not the point is it? The point is that were not benching anymore and we’re doing something that Hoi Polloi doesn’t which makes us better than them. And in the end isn’t being better than everyone else what it’s all about?

And what really distinguishes the glitterati from the rabble is our post modern approach to bodybuilding. We don’t body build even though we in actuality body build. We eschew bodybuilder even though we are in fact bodybuilder. Crossfit is the personification of this madness. They shroud their objectives with terms like functional, tactical and warrior. They spout off platitudes about being athletes and other bullshit when in actuality all they want to do is find acceptable venues where they can strip off their shirts and show off their 6 packs like a bunch of ************.

It’s not easy being member of the glitterati. It takes effort and hours way from your job, family and other responsibilities that most people put first. I’m mean the volume on has to keep up with. This week it’s 5/3/1 next week 99-trx-z, The Gaymes, Art DeVany doing Smith machine squat…ad nauseam. It ain’t an easy job but somebody’s got to do it.

Email ThisBlogThis!Share to TwitterShare to FacebookShare to Pinterest
Labels: thoughts

Wow, this guy is hilarious. BTW, I totally murdered Fran last week in 53 seconds. I had to spend 3 days in an oxygen tent but it was worth it.

I hope you were kipping

Totally. My core is rock solid, and so is my hair gel.

Ha, that was hilarious!

This is so right on the money, it's hilariously brilliant!

The internet is inflating and makes some things seem "bigger" than they are. 99% of the population has no idea what the hell paleo means or even cares.

How much "functional" training do you need to be "functional", anyway? Most of those people who have no idea what paleo means also don't do one damn functional exercise, yet somehow are still able to carry groceries in from the car and bring laundry up from the basement. Wonder of wonders!

And I'll say this, half the crap on blogs like Marks's Daily Apple is just that, unsubstantiated CRAP! For instance, he sells an antioxidant formula when there is NO evidence that antioxidants do a damn thing or maybe are even harmful. Read blogs like that and you'll end up thinking if you eat a damn bagel with (horror of horrors!) HFC sweetened jam you are going to die. Really, it is getting silly out there.

But where there's money to be made...

There's going to be the inevitable backlash against the paleo/primal/hit/movnat/etc stuff and that's fine, a lot of it is deserved. Much of it seems to come from guys (like Moynihan) who've been working out all their life.

I threw around plenty of free weights when I was in high school and college, mostly on the bench and squat. Then gradually let myself go for 15 or 20 years. A combination of HIT training, Tabata sprints, Body-by-Science strength training, and a paleo diet has got me excited about training for the first time in ages. I've even started dabbling in Tai Chi. I don't follow anything in its proscribed form, but consider it all to be a great grab basket and starting point. Since I ran track in high school and lifted weights for years, I've got more of an experience base perhaps than the typical person in their mid forties, who comes across Mark Sisson's website. But I think that going after Mark Sisson is a bit unfair. He's not dogmatic in his speculations on evolutionary diet and health, he usually has something interesting to say, and while he does push his books, he never pushes his supplements on his blog (at least not that I've seen).

Are antioxidants "substantiated"? No, but neither is the diet-heart hypothesis and that's been studied intensively for the last 40 years. What exactly is substantiated in nutrition - that a lack of things like vitamins is the cause of diseases like rickets and scurvy. Beyond that it is all speculation from a hard science perspective. So should we just give up? Perhaps we can make some basic working assumptions: it is probably better better to consume foods we've been eating for hundreds of thousands of years as opposed to say, oils industrially extracted from inedible plant seeds.

And anyone who thinks that a bagel with HFCS (glucose-fructose) anything on it isn't unhealthy is a fucking idiot. I indulge in plenty of neolithic foods but HFCS is not one of them.

I'd still rather deal with low carbers, running shoes and Bench pressers than be around loud mouthed "moynihans' anytime.Check your suppliments dude.

I've read Moynihan for awhile now and I often wonder if it's just a joke from some of the gang at Irongarm. He jumps around from one program to another (nothing wrong with that) then declares the thing he's not on to have no validity and everyone who trains that way is a bunch of D0u$hbags. He spends alot of time deriding the personal appearance of those who drink a different flavored Kool Aid. With the present state of obesity in America and elsewhere isn't some movement better than none?

I left a critique of CrossFit on Mark's Daily Apple recently and I got roundly flamed for it. The Kook-Aid over there is ever-present, just watered down a touch compared to paleonu or other sites that do not tolerate any dissent from the One True (paleo) Way.

RE Moynihan... John Walsh has more keen insight on the fitness world and a better BS detector than most of us. He's been accused of jumping from program to program, i dont' see it. He spent several months doing Bikrams, years doing kettlebells... what do you want? He's the only one out there writing with truth and clarity (besides Dan John)

Not that I would do it, but I'm pretty sure I could eat a bagel, even one made from enriched bleached white flour, with HFCS sweetened jam on it EVERY DAY for the rest of my life with no measurable ill health effects. Especially if I otherwise eat well and workout. I mean, seriously.

I like John Walsh a lot - straightforward and no BS.

you can identify each group as different persons? OK definitely you are a genius, becuase to me both groups are the same, nerds or geeks, both of them are rares.