Taking up space for a brief update

I've a couple of posts in draft that I will get up soon -  an update / reflection on Dry January and some thoughts on the scheduling benefits of short workouts if your life is busy.  Before that though, I am pointing to something else. 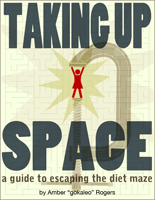 However, I wanted to highlight something that is coming this weekend that I've been involved in.  Amber Rogers (Gokaleo and author of Taking Up Space) has been pulling together a bundle of books from various authors with a common theme, one that I've been pushing here recently.  Keep it simple, avoid the hype, be patient, be consistent and flee the gurus.

I've talked before about how we get obsessed with pushing for more and more, when enough is OK.  I've given my view that so much of the health and fitness internet world is more like a gnostic religion than something that will benefit your life.

There are other voices out there saying similar things and I'll be pointing to a bundle of books later this week if you are interested in more similar idea.

In the meantime, if you want to check out the kind of thing that is coming, you might want to look at Amber's book.
Posted by Chris at 11:53 PM

"Keep it simple, avoid the hype, be patient, be consistent and flee the gurus."

Mind if I steal that motto?